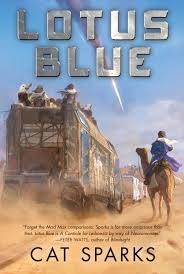 Confession time: I've read a lot of teen fiction. I'm pretty sure by now I could identify it blind-folded and spun in a circle.

And I still have no idea if Lotus Blue is teen fiction or not.

It's a dystopian sci-fi novel by Cat Sparks, which combines the advanced tech and rich world-building of Dune with the post-apocalyptic nightmare of the Max Max movies. It's set in futuristic Australia, after world-wide war has broken civilisation down to chaotic remnants. The main character Star and her sister Nene live as nomadic traders, scraping a dangerous living on the Sand Road. But after a disastrous event, Star discovers a terrible secret and is forced into confrontation with the forces that once shattered humanity.

This is one of those books that straddles the boundary of target audiences. In some ways it's geared toward the teenage girl readership, as as it follows a young woman's voyage of self-discovery.  And while there's a lot death, it never crosses the line into sensationalizing it.

However I'd hesitate to call it teen fiction due to the nasty edge of realism. Decisions have dire consequences and there's no brooding bad boy lurking conveniently in the background to swoop in and save Star. Love triangles are also mercifully lacking. In fact -  interestingly - sexuality is barely alluded to, possibly because the characters have so many other urgent priorities, like not dying. Not-dying is very important to them.

I should also note that Star is much less annoying than your average teen protagonist. Yes, she makes foolish decisions the reader can see coming a mile away. No, she never gets away with it. In fact, her entire character arc is about learning practicality. Bad things happen, some dreams won't come true, not all friends can be relied on, and denial won't change anything.

This development is contrasted with her enemies, who don't grow at all and are arguably responsible for nearly everything that goes wrong due to their inability to perceive anything except what they want to see. The most destructive thing in this world apparently isn't the pure unrelenting malice of rogue AI but the foolishness and willful ignorance of humanity. You don't have to be a moustache-twirling villain to end the world. You just need to be the dumbass that presses the button labelled 'don't press this'.

It's a melancholy outlook, but I liked it. Maybe Star was never going to reach for the sky or be saved by a white knight on a mighty steed, but by the end she could damn well survive whatever horrible trauma life threw at her and keep on trucking (Heh, trucking. That's a little black comedy joke you'll only get after Chapter Two).

Final Verdict: Good. If you're looking for something in the vein of Paolo Bacigalupi's Ship Breaker, I'd definitely recommend this.


"No matter what the Road threw at them, Nene was always
steadfast in her hope. Nene's hope was wearing Star to the bone."
Posted by Fossick Book Reviews at 02:50